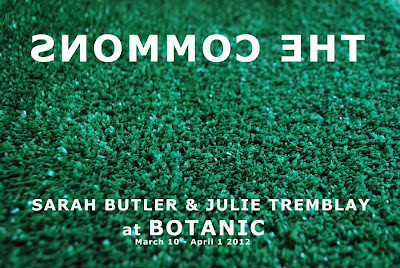 Sarah Butler
In a site-based work created specifically for Botanic’s storefront window, Sarah Butler has transcribed observed text from the local graffiti and signage and intertwined it with notional annotations from her personal experience. By marking the glass window of the gallery, the invisible barrier becomes both personal notebook and public display; a lens and screen at the same time. The formal casement of a storefront window frames the artist’s own subjectivity through which she reflects on the poetic lyricism of advertising rhetoric, parking ordinances, and neighborhood graffiti on Wyckoff Avenue.

Sarah Butler is a Bushwick based artist whose text based creative practice uses self-imposed rules, guidelines, and systematic limitation to share glimpses of her autobiographical bias on page and plane. Often using a methodological approach, she employs lyrical pen strokes, through backwards cursive, simultaneous ambidextrous and automatic writing to offer glimpses of a biased autobiographical essay. Her words and text are at first familiar but at the same time obfuscated by context, juxtaposition, and formal play, making them quickly unrecognizable. Meaning is illusive, thereby frustrating the viewer by being at the same time both revealing and concealing.

In 2011 her text-based artworks were exhibited at Regina Rex Art Gallery in Queens; The Do Right Hall in Marfa, Texas, and Interstate Projects in Brooklyn, New York. Sarah is chapter author and co-editor (with Raymond Quek and Darren Deane) of the forthcoming book Nationalism and Architecture (London: Ashgate, 2012)

Julie Tremblay
In her first Botanic exhibition Julie Tremblay offers a new installation titled Simulacra. She has transformed the gallery into an artificial green space that is saturated with vibrant grass, bright sun, and an unlikely perch from which viewers are encouraged to take it all in. Tremblay has covered the entire floor of the gallery with patio-style astroturf. In the center of the gallery, a seamless turf-covered chair boyishly leans back, absent its’ occupant, under two specialized spotlights that are positioned as if to nourish the plastic flora. Astroturf since it’s advent in the ‘60’s has been not only a kitsch-symbol of urban oases but also a genuine space for both informal and professional play. In the context of Botanic Gallery, Tremblay has embraced and combined these associations, creating a new game that she invites us to partake in.

Julie Tremblay is an interdisciplinary artist working in performance, sculpture and installation from her Bushwick studio. Recent exhibitions include Luxembourg, Montreal, and New York, including upcoming shows at 571 projects on April 5th The Nassau County Museum in Rosyln NY later this year.

Botanic Gallery is sponsored by Vinos en Wycoff we love this place and hope you do too!!!
Posted by Paul at 5:03 PM