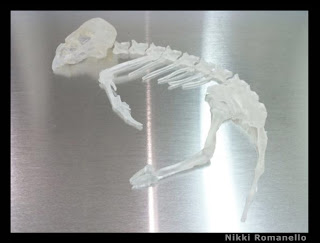 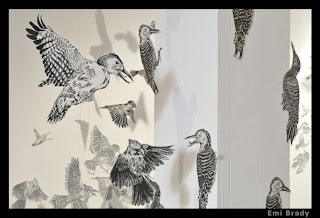 In a changing neighborhood, a warring microcosm has emerged where drawings and sculptures enliven Botanic, a provisional gallery space in the Bushwick section of Brooklyn. Lithographed birds fly off the page to escape being affixed as prostheses to hybrid mammalian monsters. Crystalline skeletons rest on white gallery pedestals transformed into examination tables. They hold fossilized evidence of the violence of which echoes an upheaval happening all around us.

This exhibition is the first major collaboration by Emi Brady and Nikki Romanello. While divergent in their approach, each artist posits an alternate world full of oddities, mutations and deviations from the objective artifact. Brady’s excised print images seem to flutter around the room and come alive; flat & linear; they simultaneously maintain their “drawingness” while fully engaging the interior of the three dimensional gallery space. Romanello’s sculptures, skeletons composed of various animal bones re-cast in glycerin soap. They become inanimate objects of existential contemplation. Though derived from things once animated they are motionless objects whose fragility is heightened by the nature of their material. The whole installation is an environment where the viewer is permitted to walk among the remnants of a primordial land.

Brady and Romanello’s creatures are carefully considered down to the last detail where each bone, limb, bird and flock was chosen and arranged for its’ relationship to the whole. Axioms surrounding creation, augmentation, and biodegradation heighten the interpretation of these combinations. The incredible cultural artifact collides with the credible depiction in this exhibition. And it is this conflict that creates a sense of timelessness, a moment of tranquility in the center of the melee that affords us the opportunity to be absorbed in these artists’ vision.